The company mission statement defines the purpose of its existence as a market entity. The generation of profits is the result of realizing the objectives of the mission statement and is a necessary condition for the continued operation and development of the company; however, it is not the sole aim of its operations.

The mission statement of Omega is to ensure that our partner companies may develop by delivering top quality services with regards to the design and manufacturing of wire harnesses as well as the installation of electrical and electronic equipment.

We fulfill our mission through the constant development of our team. The company vision is the goal towards which we are striving at the moment, which means it can change. Once the goal is reached, a new one will be set.

Our vision is to earn the Golden Supplier award for the most demanding customers in the electrical vehicle and renewable energy industries. This entails achieving the highest level of excellence in all our internal processes, and the application of the principle of continuous improvement as the go-to operating formula for all members of the Omega team.

Our values act like road signs. We look up to them in times of uncertainty such as when there are conflicting opinions about the necessary decisions which should include the interests of all the members of the organization, customers and suppliers. However, if such road signs are to be useful in a crisis situation, we need to learn to operate according to these values on a daily basis.

The company values of Omega focus on partnership, understood as respect, trust and transparency. We have learned to build relations based on partnership regardless of our differences.

The Omega team members treat each other and everyone else with respect, which means we keep our contracts, acknowledge different opinions (which does not mean we must take them as our own) and take full responsibility for our actions in the understanding that our partners may only complete their obligations if we make good on our own ones.

Trust, as understood in practice, means we assume that all the Omega team members carry out their work with the very best intentions, and that we all come together to our company to fulfill shared goals. Any misunderstandings are seen as results of miscommunication and not the bad will of the other person.

Transparency is about sharing all work-related things at our company – information, knowledge, observations and opinions; we speak openly, we talk about what we see and ask about the things we do not understand (instead of assuming that others will figure out what we need). 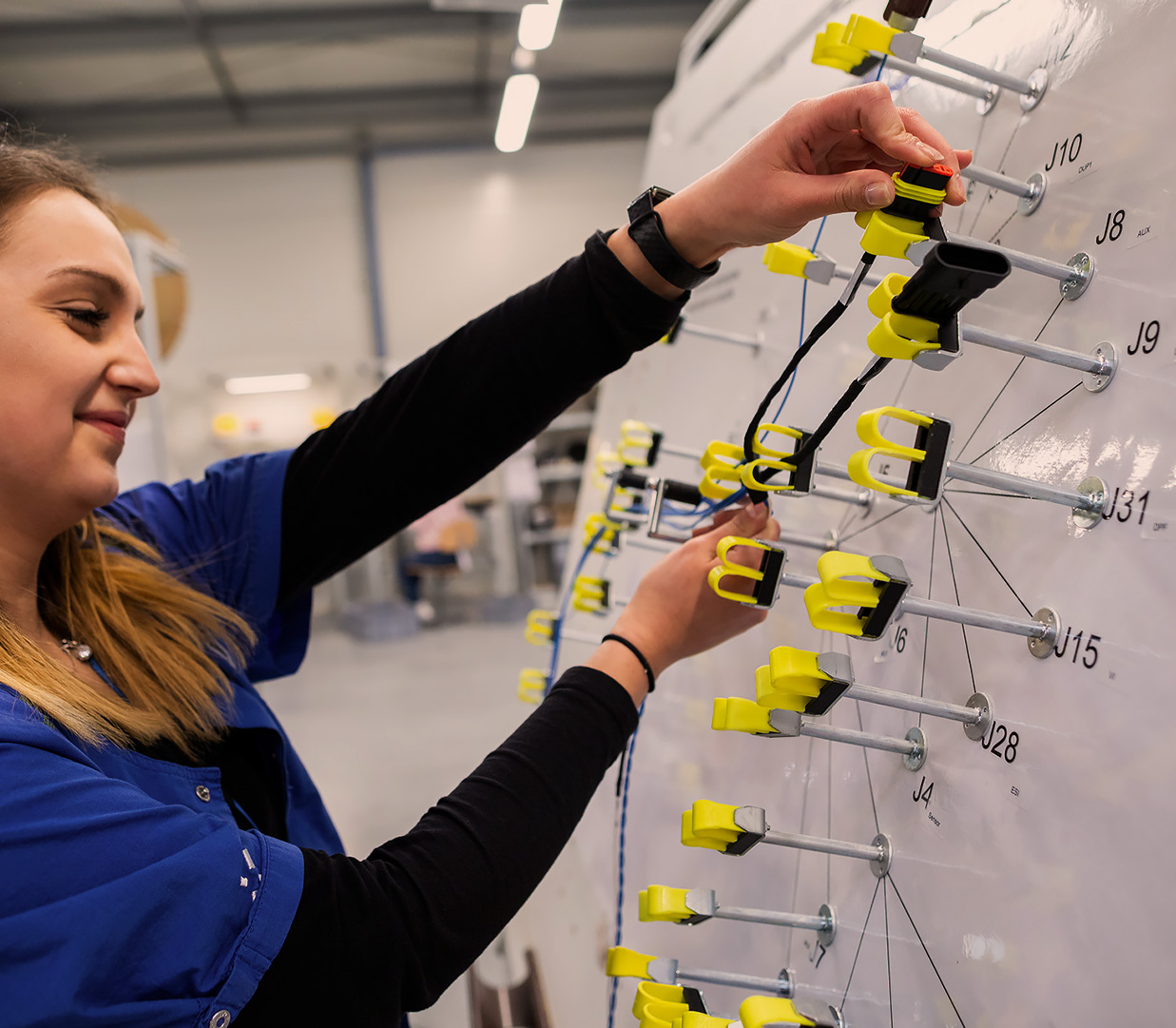 We are a part of a greater whole

Omega stands for its owners and the team making the company, we strive to ensure that the result of the market operations brings measurable benefits to all the interested parties.

We see ourselves as a part of a larger whole, a link in the supply chain connecting billions of people all over the world. We take care to keep the entire system together – therefore, we strive to deliver the best quality on our end. This is the quality we expect from the products we buy every day, and this is the quality we deliver with our wiring harnesses.

Since 2017, the employees have been constantly focusing on their own development and the ability to effectively collaborate as part of project teams. The daily practice of internal customer service is necessary so that we can be seen as business partners by our customers and suppliers.

We seek innovative solutions in order to improve availability, on-time delivery and flexibility. We are always improving our communication skills to reduce the time necessary to make any necessary arrangements as well as to communicate accurately and without mistakes. We seek savings on every stage of our day-to-day work and in the course of our projects – the objective is to always reduce the expenses borne by our customers.

Omega was founded in 1989 by our mentor Ryszard Gacek, PhD, Eng., presently the Vice-President of the Company Board.

For 11 years the Electronics Company owned by Ryszard Gacek, operating in Kraków, has set the foundations for future company development, its operations focused on manufacturing small power supply cabinets, extension cords and laboratory heaters, and were conducted in a rented detached house.

In 2000, the company accepted an order to manufacture wiring harnesses for a buyer in Germany. The entire first supply was returned to Omega and became an important lesson in quality, which was paid for by the company over the next 5 years as we worked to recover the loss.

In 2005, the Omega team was joined by the founder’s son, Maciej Kacper Gacek, presently the President of the Board. His goal was to expand the company exports. The company operates on a 100 m² area, has a workforce of 9 people, with 20 suppliers, 6 customers and manufactures 50 types of simple electrical wiring harnesses.

The year 2006 marks the first deliveries to Denmark and Great Britain as well as the implementation of the ISO 9001 quality management system.

In 2012, we obtained the industry certificates IPC and UL

The production volume and employment continued to grow very quickly and the space available to date proved to be insufficient. Due to the fast growth of production and employment, the Board decided in 2013 to purchase land and build a manufacturing facility.

Fall 2015, without interruption to the manufacturing process, we moved to Morawica, which provides 3100 m² of modern and comfortable manufacturing space with a two-storey hall and office space. Our team then consisted of 111 employees.

Near the end of 2016, we began the process which is still in progress today, to change our company organization structure from solo mentality to partnership-oriented. This decision followed logically as a consequence of our previous activities to emphasize long term company growth and development. The market requirements and its changing dynamics call for the intensive and ceaseless development of all employees for every supplier, so that they can work together as part of many different teams.

In mid April 2018, our team comprised 150 employees; through the efforts of our engineering team we started our first workstation featuring a robot working together with an operator. Repeatable manual tasks are performed by the Mitsubishi robot that transfers semi-finished products to the operator.

Since 2017, year after year we have been honored with a highly prestigious recognition – The Diamond award by the Forbes monthly.

Year 2019: we are buying components from 200 suppliers, manufacturing over 2700 types of complex wire harnesses for 70 customers, our team comprises 120 operators and 72 non-manufacturing employees. 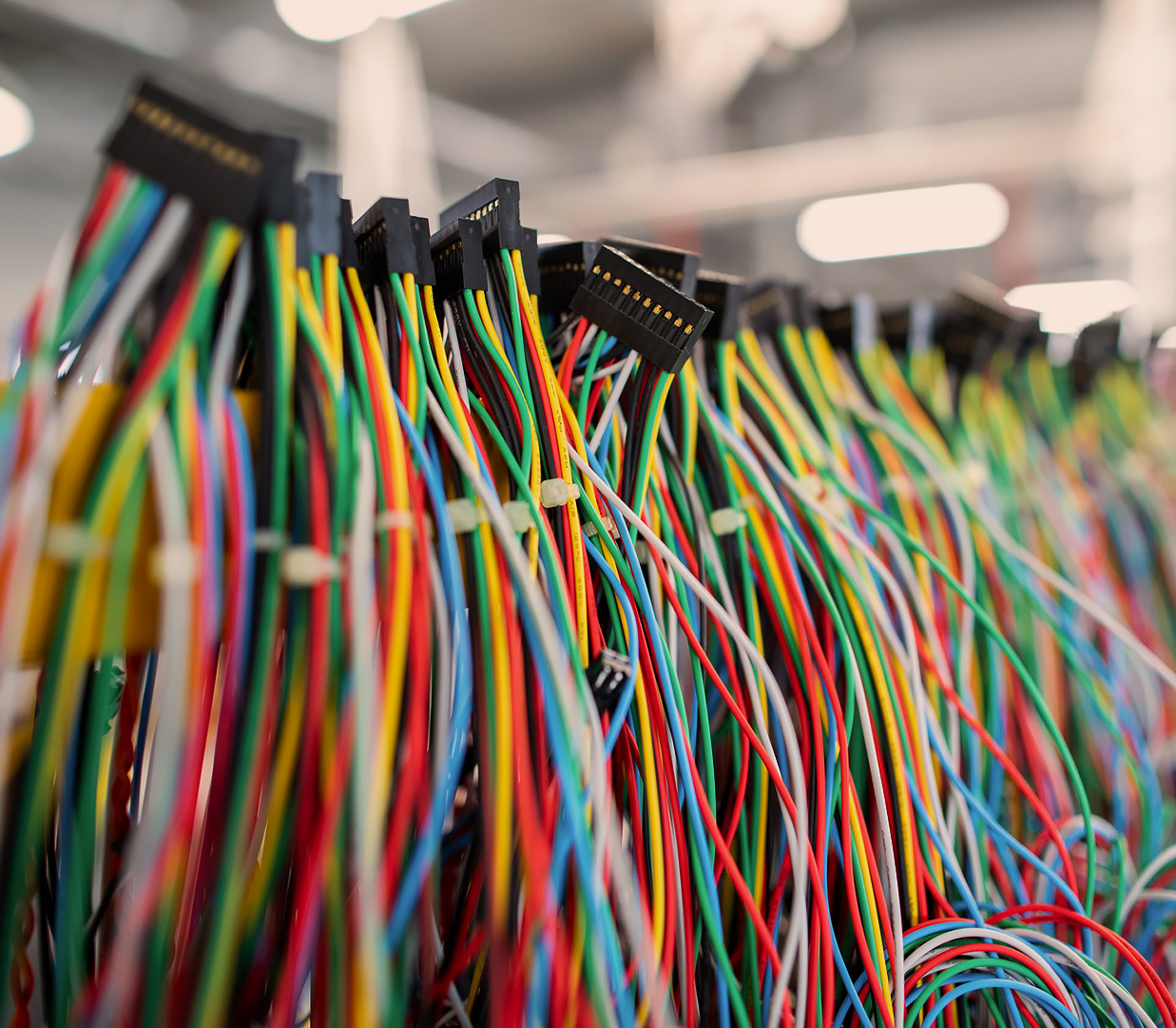 Since 2000, our manufacturing, 60% of which is export, has grown by 20% each year, our customers include manufacturers of automated solutions, electric vehicles, household appliances, medical equipment and automotive parts.

Our wiring harnesses can be found in electric buses, motor scooters as well as in fuel distributors and air conditioners. Components equipped with our wiring harnesses are used in the manufacturing of medical equipment, coffee makers, electric kettles and power tools as well as all kinds of automated solutions for industrial applications.

Quality is of utmost importance, we define it as the degree of our meeting of the expectations of our customers.

We have implemented an integrated quality management system ISO 9001:2015 and environmental management ISO 14001:2015. This system is being constantly improved and updated in order to meet the requirements of IATF 16949:2016. We possess the UL certificate for the manufacturing of electrical harnesses according to the standards ZPFW8 and ZPFW2. The registration of our company at Underwriters Laboratories Inc. (UL) can be verified under reference number E351588.

At the request of our customers, we will provide SPC and MSA data. We can prepare comprehensive PPAP documentation and possess the necessary experience in drawing-up inspection plans and FMEA documentation. All these items are necessary when manufacturing electrical harnesses for the automotive industry.

We constantly monitor our control and measuring equipment and calibrate our measuring instrumentation. We carry out analyses of machine and process capability indices (Cp, Cpk). We continually seek opportunities for self-improvement e.g. by performing internal audits.

We provide operator training, mostly on those issues relevant for the IPC/WHMA-A-620 PL standard. Raw material quality is monitored via incoming goods inspection. We also carry out evaluations of the metallographic sections.

The Quality Department supports all the other company departments to understand, build and practice quality-oriented operation.

We monitor the quality in every workplace and for every activity performed by Omega employees.

The Omega team does not include any dedicated controllers. The Quality Department and its quality engineers and quality specialists help us ensure we meet the desired level of quality in carrying out the manufacturing orders with the use of special tools. The increasing quality of wire harnesses we deliver to our customers, however, is the result of the quality in the relations between all of us, as members of the Omega team. We find the constant improvement of these relationships to be of utmost importance. 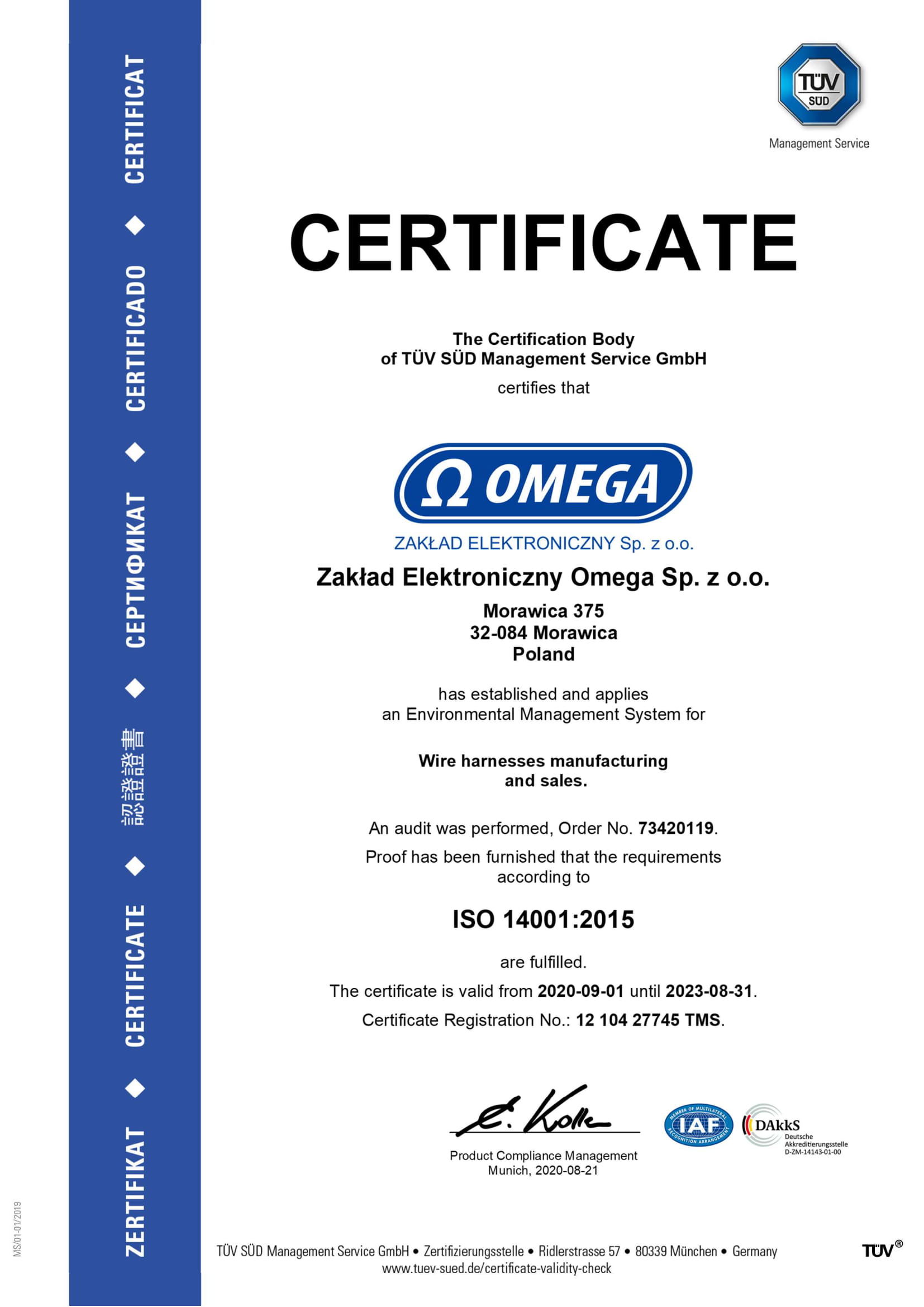 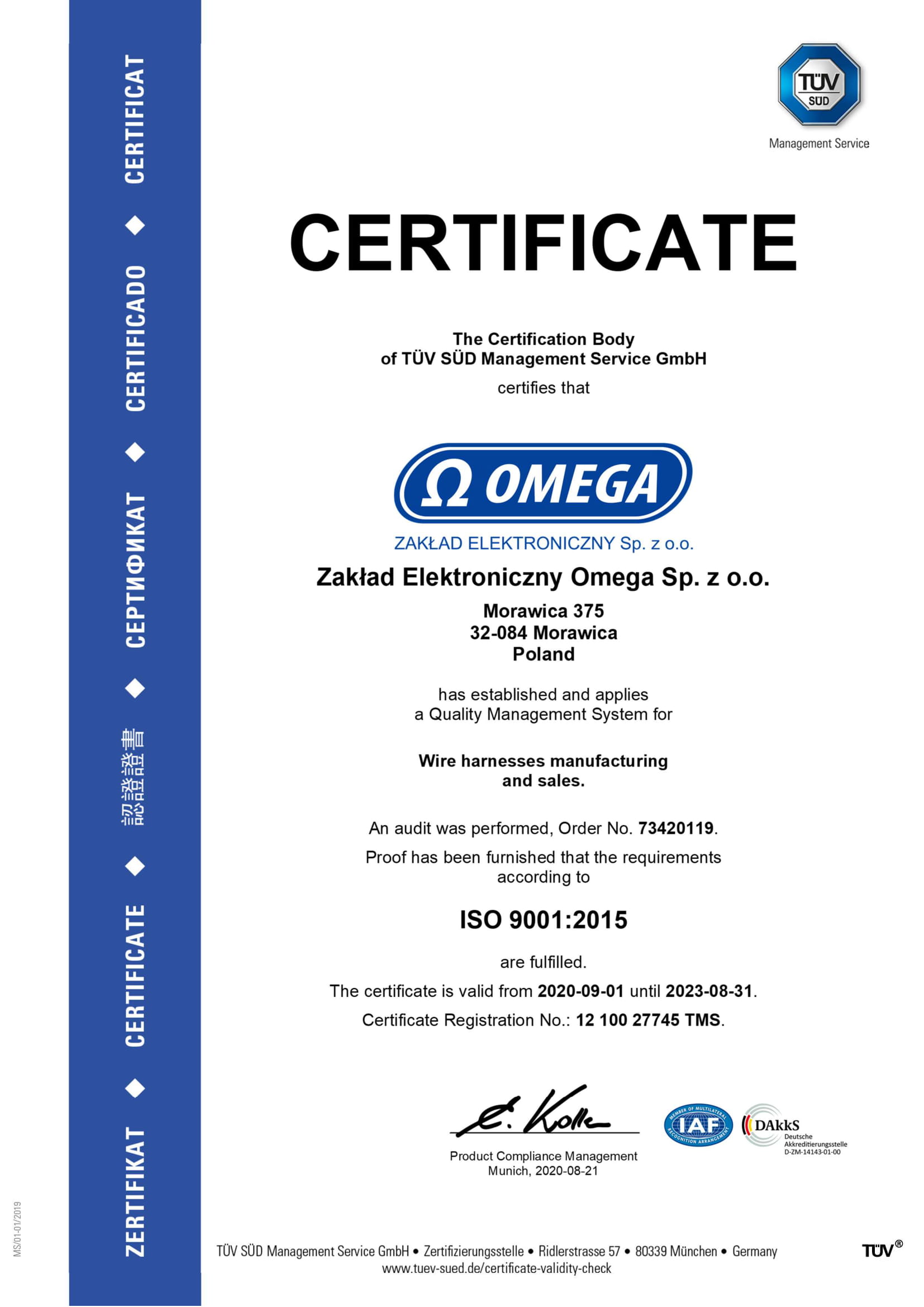 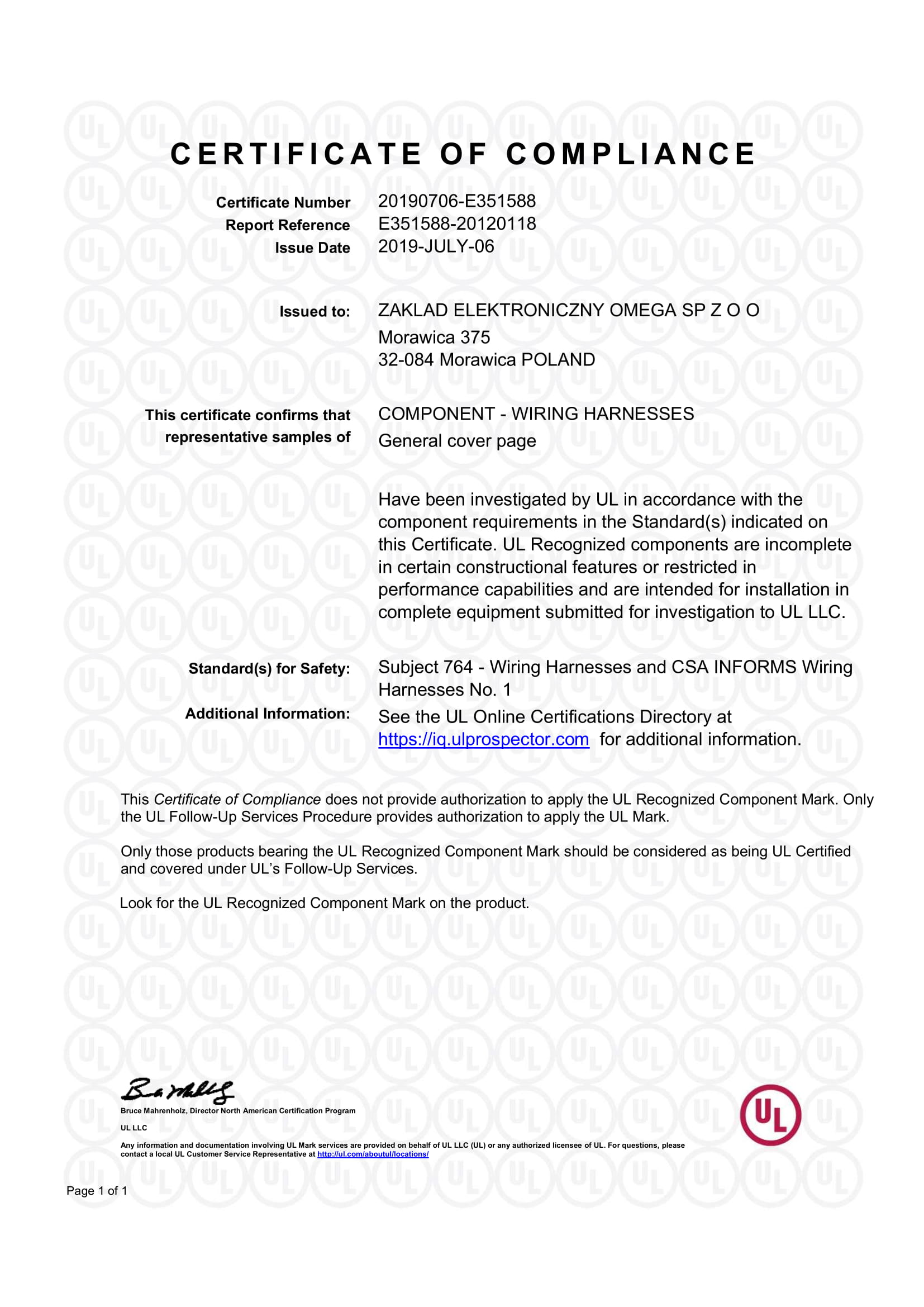 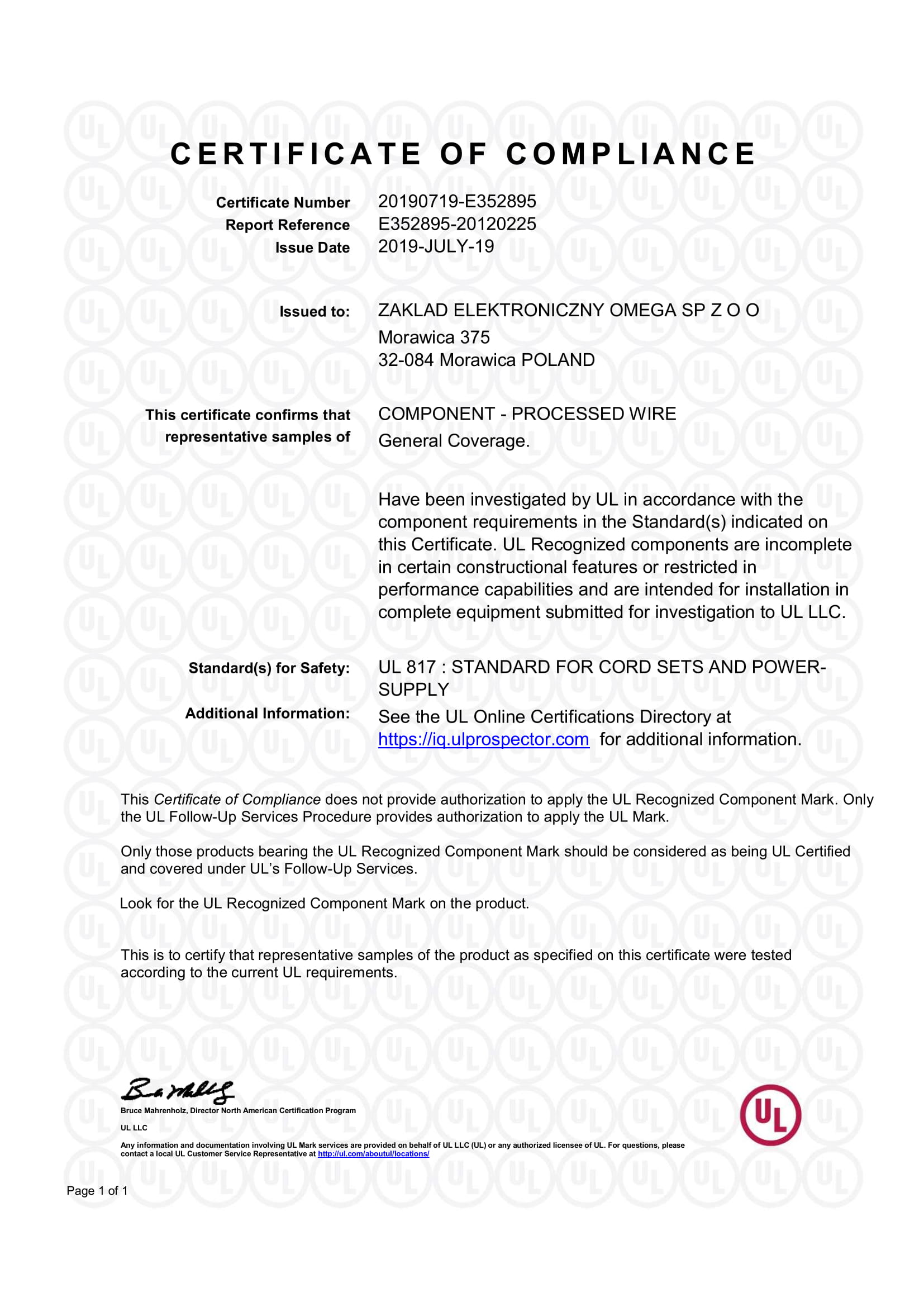 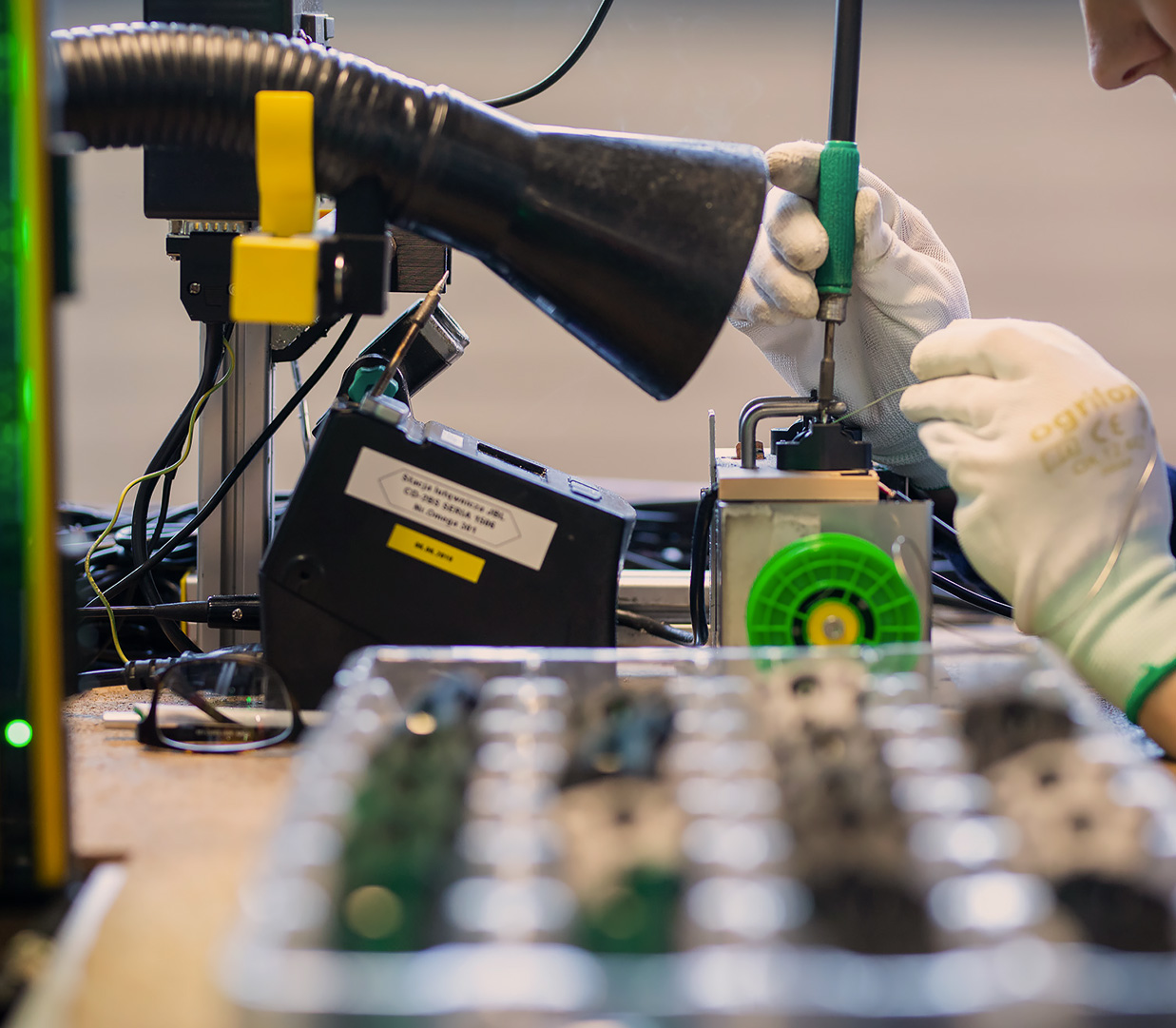 Our operating structure is a matrix, many employees tasked with the design and preparation of the manufacturing process are also included in the project groups. Every new order for a new wiring harness means we form a new design group.

This organization structure allows for a large degree of flexibility and the ability to operate under conditions of continuous and dynamic change. Additionally, this is the optimal working formula from the standpoint of the ever-growing requirements of our customers.

The company board understands that its goals can only be met by a strong team of professionals and thus implements process management solutions and builds a culture of partnership within the organization. Multitasking is the assumed default order of work.

Our goal is to build a team comprising persons motivated by the continuous development of competence through overcoming challenges. We feel responsible for ensuring cutting-edge quality at every stage of our company operations.

The harmonious, respectful, trustworthy and transparent relations in our company result in product quality which exceeds the expectations of our customers and also a high standard of living of the employees and their families. Our motto: We are part of a bigger whole, reflects the idea of co-dependence between the company and its stakeholders, we are aware that we are building a socially responsible organization.

This website uses cookies to improve your experience while you navigate through the website. Out of these, the cookies that are categorized as necessary are stored on your browser as they are essential for the working of basic functionalities of the website. We also use third-party cookies that help us analyze and understand how you use this website. These cookies will be stored in your browser only with your consent. You also have the option to opt-out of these cookies. But opting out of some of these cookies may affect your browsing experience.
Necessary Always Enabled

Any cookies that may not be particularly necessary for the website to function and is used specifically to collect user personal data via analytics, ads, other embedded contents are termed as non-necessary cookies. It is mandatory to procure user consent prior to running these cookies on your website.